NEW DELHI, May 26 (Reuters) – An Indian man obsessed with setting Guinness world records got 366 flags tattooed on his body and had all his teeth removed so he could put nearly 500 drinking straws and more than 50 burning candles in his mouth.

Har Parkash Rishi, who claims to have set more than 20 records, now calls himself Guinness Rishi.

Born in 1942 in a cinema hall in the capital, New Delhi, Rishi first got into the Guinness Book of World Records in 1990 when, with two friends, he rode a scooter for 1,001 hours.

The passion to get his name in the record book led him to perform some bizarre acts, including delivering a pizza 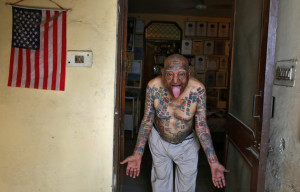 Guinness Rishi, 74, multiple world record holder including most flags tattooed on his body, poses for a photograph outside his apartment in New Delhi, India May 20, 2016. REUTERS/Cathal McNaughton TPX IMAGES OF THE DAY from New Delhi to San Francisco and gulping a bottle of tomato ketchup in less than four minutes.