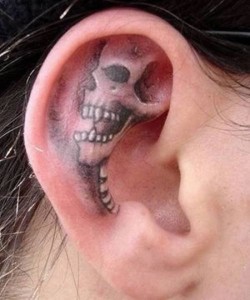 Here’s a joke among tattoo artists that whenever Rihanna gets a new tattoo, droves of 20-something women will soon come asking for the same.

A few years ago, the singer adorned the upper portion of her left ear with the outline of a star. Not many came asking then, but, in what seems to have been a self-fulfilling prophecy, more are now.

“Anytime there’s a condensed spot, where one little tattoo makes the whole spot look filled up, that’s where the trends come from,” said Brad Stevens, a tattoo artist at New York Adorned in Manhattan, who said he tries to dissuade many people from getting visible tattoos, sometimes dissuading them altogether.

Although the space confines of the ears demand simplicity in design, ears frame the face, making them bold choices for ink placement. Some ear tattoos, such as the two Grape-Nut-sized stars that model Cara Delevingne got on the front of her right ear, look like piercings from a distance. But others, such as the spider web that fills the entire top portion of the model Catherine McNeil’s right ear, take a certain stylish gusto to pull off

“I saw it in a fashion magazine, actually,” said Keely Kuykendall, 31, a costumer for TV and film productions who got a spider web on her left ear in 2012 after seeing Ms. McNeil’s. “My ear is so big that mine ended up being way more of a statement piece. But I totally copied her.”

As Ms. Kuykendall discovered from her experience, the ear anatomically differs drastically among people. The top part of the ear has the most tattoo-able surface area, composed of the scapha (the flat part near the outer flap at the top) and the crus of the antihelix (the raised ridge closer to the middle). Scaphas that flow into unprotrusive cruras make for ideal canvases. Smaller, highly ridged ears are hardly tattoo-able at all.